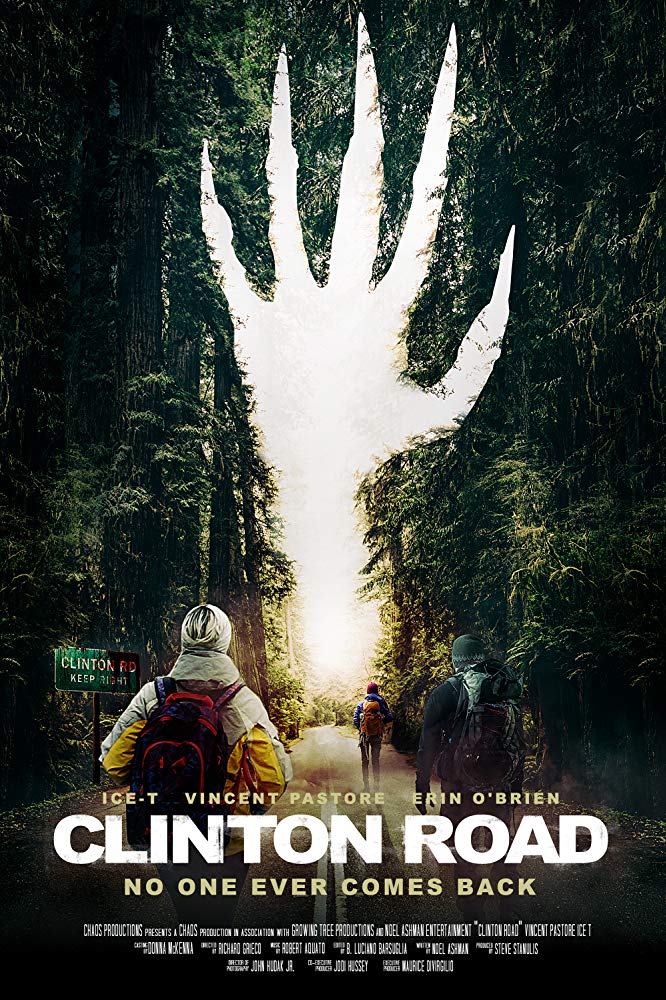 You don’t expect your horror movie to be directed by Richard Grieco; however, if it is, you do expect it to open at a chic New York nightclub.

Said club is owned and operated by Ice-T, an ex-cop (all those years on SUV must have lead to his retirement) who warns our young protagonists off of Clinton Road – supposedly the most haunted place in America. Michael (Ace Young)’s wife disappeared in the area, and he and his motley gang of 20 something club kids are going to search the area.

From the club they head to the woods, where they find themselves stalked by a supernatural killer who looks like he was kicked out of System of a Down.

Urban legends are a subject ripe for exploitation in horror films, but they’re rarely handled successfully. The actual Clinton Road is littered with accounts of strange happenings, but it’s rarely mentioned among more well-known accounts. So credit the film with exploring an urban legend only discussed on the most obscure episodes of television shows about haunted America.

Grieco co-directed with Steve Stanulis, and they’re at least capable of putting together a so-bad-it’s-good-horror film. The jump scares are just a little mis-timed, completely gratuitous sex scenes and the characters – while thin – feel almost legitimate. These certainly are city folk that have no place in the woods. Less believable is Bigory, the new age psychic medium who tags along and rambles on about being in touch with nature. He feels poorly integrated, and one gets the sense the filmmakers wrote him in due to their own personal beliefs. It’s easy to imagine someone like Grieco buying into the sort of earthy mumbo jumbo Bigory spews out.

And Grieco’s clearly working his Hollywood connections, however tenuous. Apart from Ice-T, the opening scene features Vincent Pastore and Eric Roberts (!) as himself.

One can’t imagine Grieco having much of a future as a filmmaker. As a nightclub owner, however…

Clinton Road Is Now in Theatres